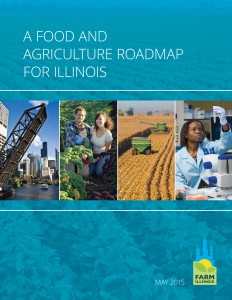 The state of Illinois—along with much of the Midwest—is built on a foundation of food and agriculture. Illinois is the number-one state in the country for soybean production and second for corn production—two of the most versatile staple crops in the world—as well as fourth for hog inventory and sales. Those are impressive numbers. And yet in the eyes of consumers and the overarching business community, the sector operates in the background, feeding us and the world but not always recognized for its economic might nor its breadth.

Yesterday, a report was released called the Food and Agriculture RoadMap for Illinois (FARM Illinois). My colleague Scott Leff and I worked with the leaders of FARM Illinois on the report, which itself was the result of a nine-month effort that brought together stakeholders from every corner of the state’s food and agriculture system. The goal was simple but incredibly ambitious: to develop a comprehensive strategic plan to make Illinois and Chicago the leading global hub for food and agriculture system innovation.

And why not? Our assets, from prime farmland to freshwater access to a sophisticated transportation system, lay a solid foundation. Communities across the state depend on farming and related industries for their livelihood. Chicago is a global city that happens to be home to one of the most important commodity exchanges in the world. Indeed, the proximity of a top-tier business community to the farmers who produce billions of dollars of food each year gives Illinois a unique edge. And yet traditionally, these two groups haven’t collaborated as closely as they should. A lack of coordination means that progress is often incremental and isolated, not systemwide. In short, Illinois won’t reach its potential—and keep up with growing worldwide demand for food—without unified action.

The situation is in fact quite urgent: here in Illinois, one in six people don’t have the physical and economic means to procure nutritional food all year round. Worldwide, it’s one in nine people. To alleviate hunger and combat obesity, collaborative leadership is needed on everything from eradicating poverty to ensuring food is available, accessible, stable, and utilized.

Macro trends also present a compelling call to action: global population is skyrocketing. As wealth accumulates, diets shift from grain-based to a preference for more meat and processed foods. The effects of climate change are very real and growing more severe. As a result, the global food and agriculture system is facing massive pressure to increase output in years ahead.

FARM Illinois set out to address these challenges and more. The project brought together 150 stakeholders—industry experts, academics, policy makers, thought leaders—to discuss what needed to be done. It was the first time many of these people had been in the same room, despite their shared interests. The report thus had to synthesize disparate opinions and missions into a coherent plan—and this plan had to be realistic. Fortunately, the report’s five committees were stacked with experience and ideas, and effective examples abounded; in particular, World Business Chicago’s Plan for Economic Growth and Jobs provided a model of a plan that is both specific and inclusive.

The FARM Illinois plan is a game changer. It is both zealous and practical, offering a fully vetted set of strategies to achieve a wide range of goals. Far from shelfware that simply regurgitates known information or summarizes a sector, this plan has legs. The proposed Illinois Council for Food and Agriculture—strategy number one of the plan—will ensure that those legs keep moving and that the stakeholders who participated in the formation of the report will remain involved.

The report would not have come together without the diligent efforts of the FARM Illinois leadership team, including project directors Lori Healey and Lee Strom and project manager Tyler Strom. Throughout the process, the team provided steady guidance that ensured the accuracy and inclusiveness of the report, from the big picture to the smallest factual details. As the plan neared completion, we worked closely with them to ensure all messaging was concise, distinctive, and coordinated with the public relations strategy handled by Resolute Consulting.

To support the plan’s rollout, Scott and I worked with our designers, Delilah and Jake, to create both the 88-page report as well as several pieces of collateral, including a four-page overview of the plan and a two-page summary of the recommendations. The process of creating these pieces is an example of what we like to call lean content creation; once the heavy lifting on the report’s editorial and design development was complete, it was a relatively quick process to develop additional supporting pieces. The materials are also vivid thanks to beautiful photography sourced from almost two dozen organizations as well as a sleek, intuitive design and layout. The result is a set of living documents that can be used in a variety of contexts, from detail-oriented governmental briefings to road show presentations.

All of us at Leff Communications were honored to be a part of the project. And we are confident that in the coming years, Illinois and Chicago can—and will—lead the world in food and agriculture system innovation.

Brittany is a senior editor at Leff. She is passionate about helping clients tell their stories through incisive, fact-based narratives. Every once in awhile, she takes a break to muse on rhetorical devices, grammar, and content strategy on the Leff Communications blog. Follow Brittany on Twitter @britpetersen.

Previous Post (p) How to ensure your city's self-image—and the policies that come from it—go beyond skin deep
Next Post (n) Design tips for business content: Embrace the "space" (white space, that is)