When the clock struck midnight on December 31 to usher in another year, I had the usual set of reactions: mild horror at how fast time is passing; excitement at the potential for the new year; gratitude for the many talented and passionate people in my life, both within and outside of work. But there was another realization that hit me a little harder: 2016 was finally here. During my two years working at the city’s Olympic bid, 2016 had come to represent “what could be”—the driving force for all our hard work. It also felt like an eternity away, so it was more than a little sobering to realize that nearly six and half years have passed since Chicago was unceremoniously bounced from the competition in the first round.

Since that time, in my conversations about the bid experience, the Olympic Movement, and the factors that led to that outcome, I had the opportunity to make sense of what had influenced the decision. The arrival of the new year brought all of those deciding elements back into focus. Chicago’s plan for the Games, which encompassed not only sports venues but also hotel accommodations and transportation infrastructure, was superior to Rio’s in many ways. (The steady stream of articles pointing out the abysmal state of the water venues in Rio and the huge shortage of hotel rooms suggests that my assertion isn’t just sour grapes.)

However, Rio’s messaging was much sharper, more compelling, and ideally suited for the International Olympic Committee (IOC) members who decided the contest. The Rio bid’s success can be summed up with one visual: 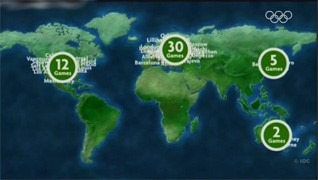 Rio’s main pitch could be grasped within seconds of looking at the map. Other continents had hosted the Games tens of times, but South America had never been awarded the honor. For the Olympic Movement, which claims to reach to all corners of the world, the omission was glaring. The map was devastatingly effective for another reason: IOC members hail from around the world and speak a wide variety of languages. The map required no specific language proficiency to be understood. Rio knew its map was effective and featured it in several presentations prior to the final pitch.

We’ve written before about the impact of a simple, concise idea communicated clearly. In too many cases, the fear of omission or death by committee conspire to prevent an idea from connecting with a target audience. When loaded up with inessential industry terminology and details, even the best ideas can be obscured. To Rio’s credit, its communications team was able to avoid those pitfalls.

Over the past five and half years, my team and I have worked on many projects that have reinforced the power of visuals. We are regularly reminded of a few things: people love maps; icons and typographic treatments are indispensable editorial elements; and short, digestible, and shareable have taken on added importance in the fight for a reader’s attention.

Time will keep surprising me with its swiftness. Each new year will bring fresh challenges and insights, but one thing will continue to be true: an appropriate picture can be worth a thousand thoughtfully crafted words.