People love to hate pie charts. Some data visualization experts, such as Edward Tufte, even say to never use them. While I agree that pie charts muddle certain data, I think that they can work when used in the right way.

A bit of history
William Playfair, a businessman, economist, and engineer, is the founder of graphical methods of statistics. He invented the line, bar, and area charts in 1786. The last of his invented charts was the pie chart, published in The Statistical Breviary in 1801. Here, he created a visual that displayed a series of circular charts that were segmented and color-coded to display how land areas had changed in Africa, Asia, and Europe. 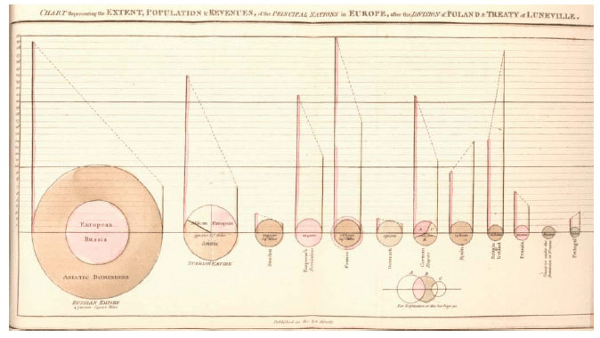 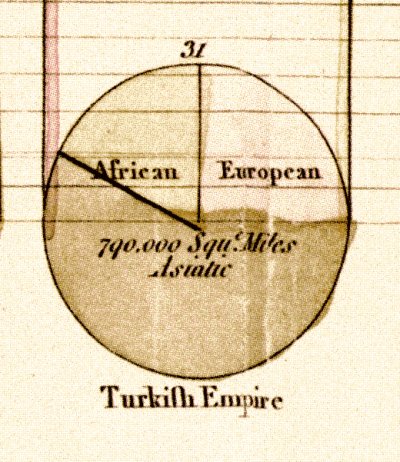 Today, pie charts are popular in the business community, where they are used in client presentations, reports, white papers, and surveys. Pie charts can be used to show fractions of a whole, and people like to use them because they believe a circular shape is pleasing to look at. However, round shapes actually don’t convey size to our eyes as quickly as rectangular ones. And unfortunately, the idea that pie charts are visually pleasing has led to their overuse, misuse, and abuse.

When in doubt, make a bar chart
One way a pie chart can fail is if all the pieces are similar in size. This makes it difficult to distinguish subtleties in the data because the angles and arcs trick your eyes. Unless the percentages are noted on the chart, it is very difficult to decipher the relationship between the pieces. Below is an example where the data is more clearly distinguishable in a bar chart form.

Another common pie chart failure is when they incorporate too many pieces. When there are more than five or six pieces, a pie chart can become confusing and unreadable. In the example below, it’s difficult to distinguish between many of the percentages, and labeling around the pie pieces can get messy. 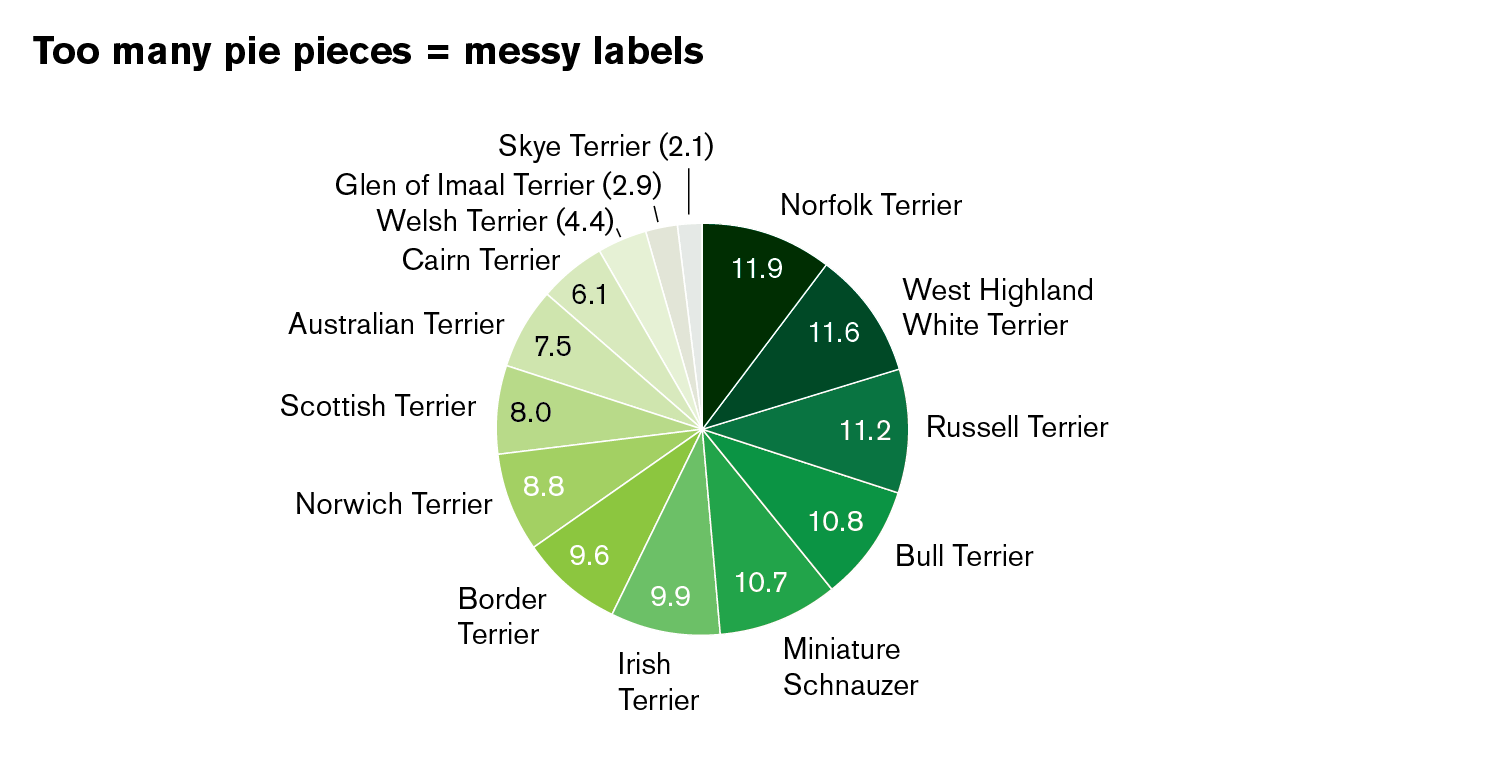 When you have more than five or six pieces of information and don’t want to deal with labeling, you might be tempted to make a key. As a result, you end up with a rainbow of colors clashing with one other, a key that nearly doubles the space of the chart itself, and a reader who has to play visual ping-pong to figure out which pie piece belongs to what label. And then forget about printing this out in black and white! 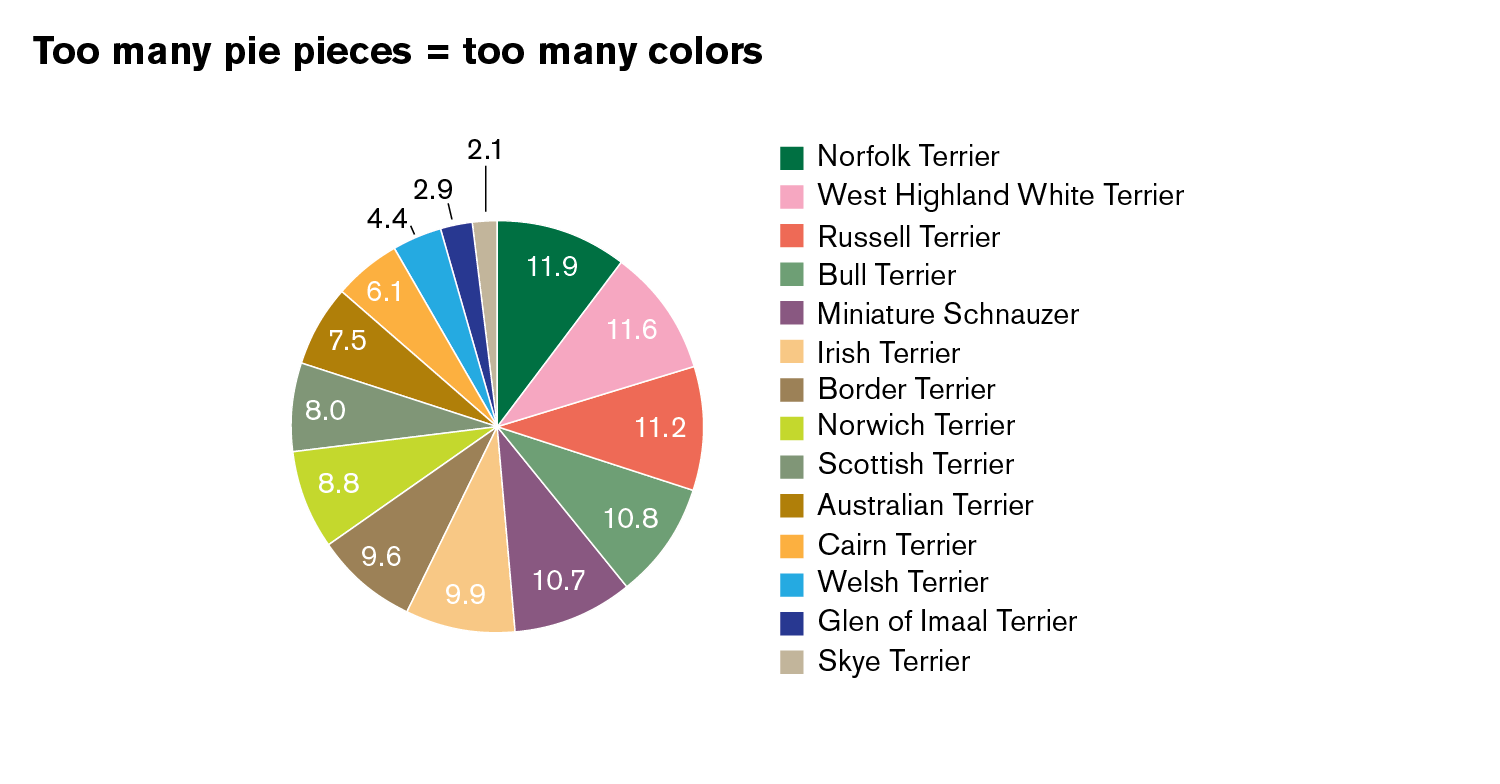 So, why have a pie chart at all if it doesn’t help a reader grasp the data quickly? In these situations, you are better off with a bar chart or even a simple table with the numbers listed. A bar chart or table is easier to read, and the differences between entries are more obvious. 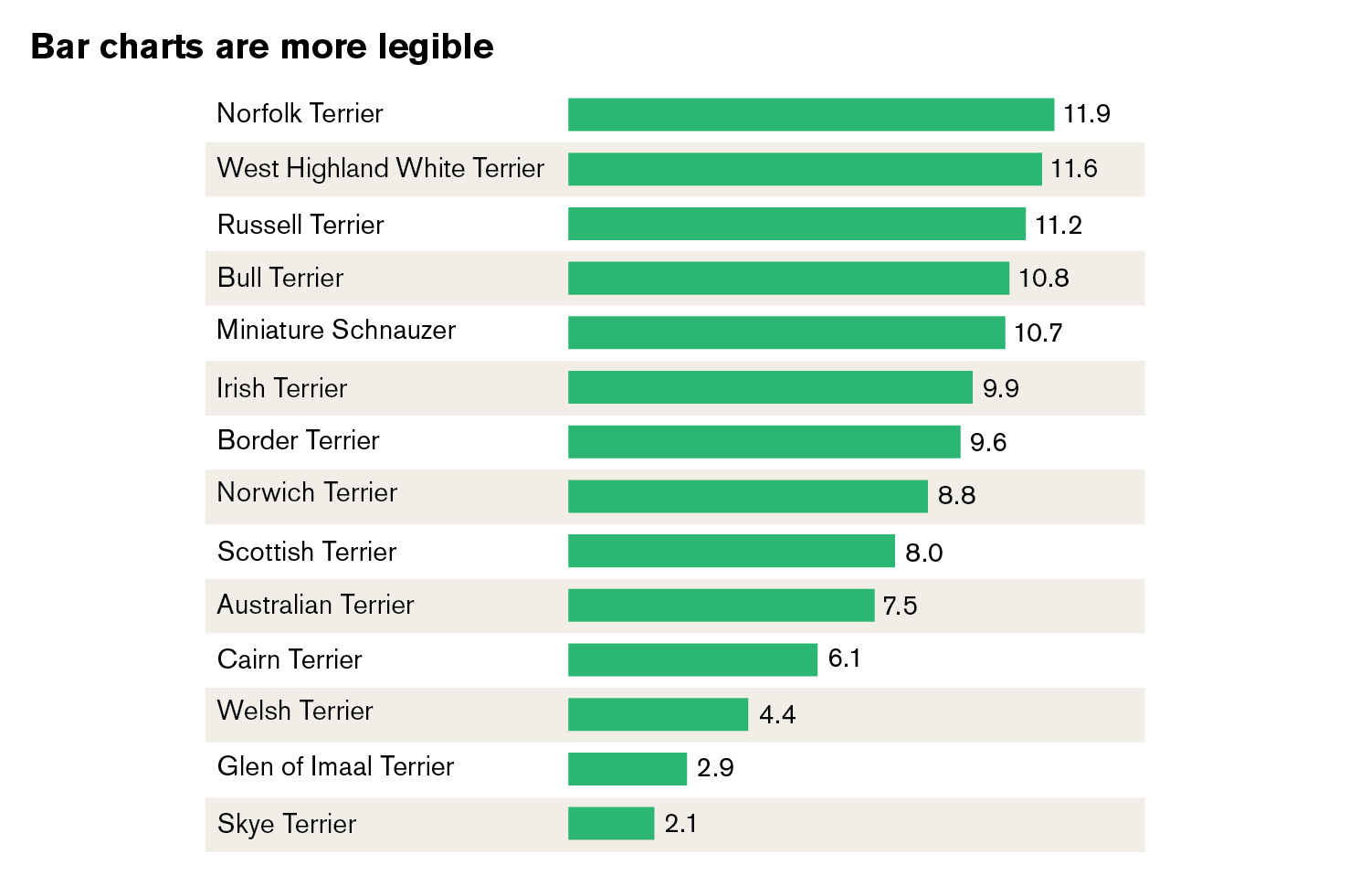 For heaven’s sake, stop with the gimmicks!
Sometimes people want to present data in a clever or new way. This is how pie charts end up overdesigned and abused. It is, regrettably, possible to add 3-D treatments and transparencies to charts in most software composition programs. It is also often an option to design a custom shape for a chart. These gimmicks make charts harder to read and can skew the data.

For example, the 3-D perspective creates uneven sides that distort the view. At a glance, the dark red piece in the chart below may appear larger than the orange piece since it’s in the foreground. (It’s actually smaller.) 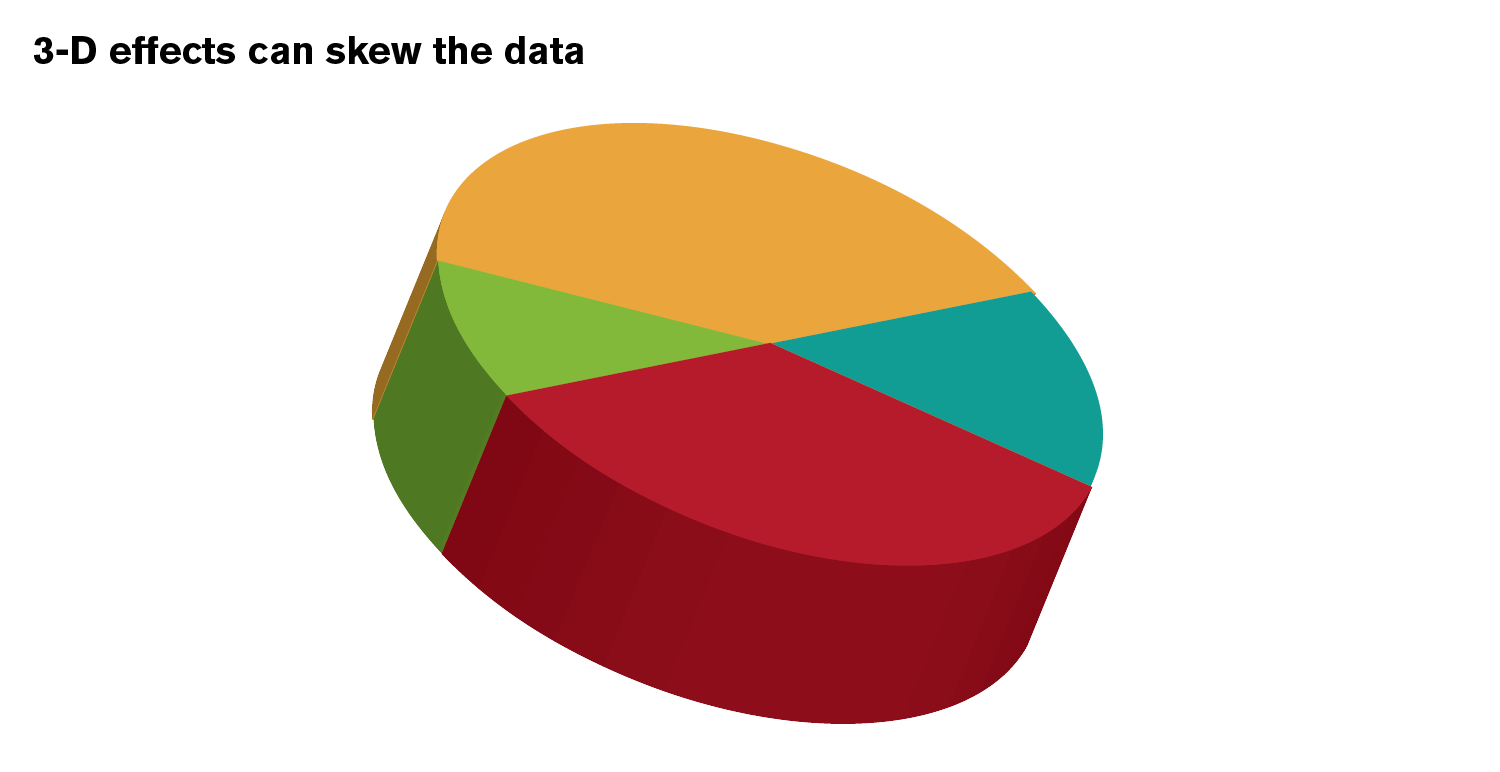 Using 3-D effects along with transparencies introduces excess visual complexity. See the ridiculous example below. Why is the purple piece the tallest but the orange one the shortest? There is no logical reasoning for this treatment, and it is, again, difficult to tell the relationship between the pieces. 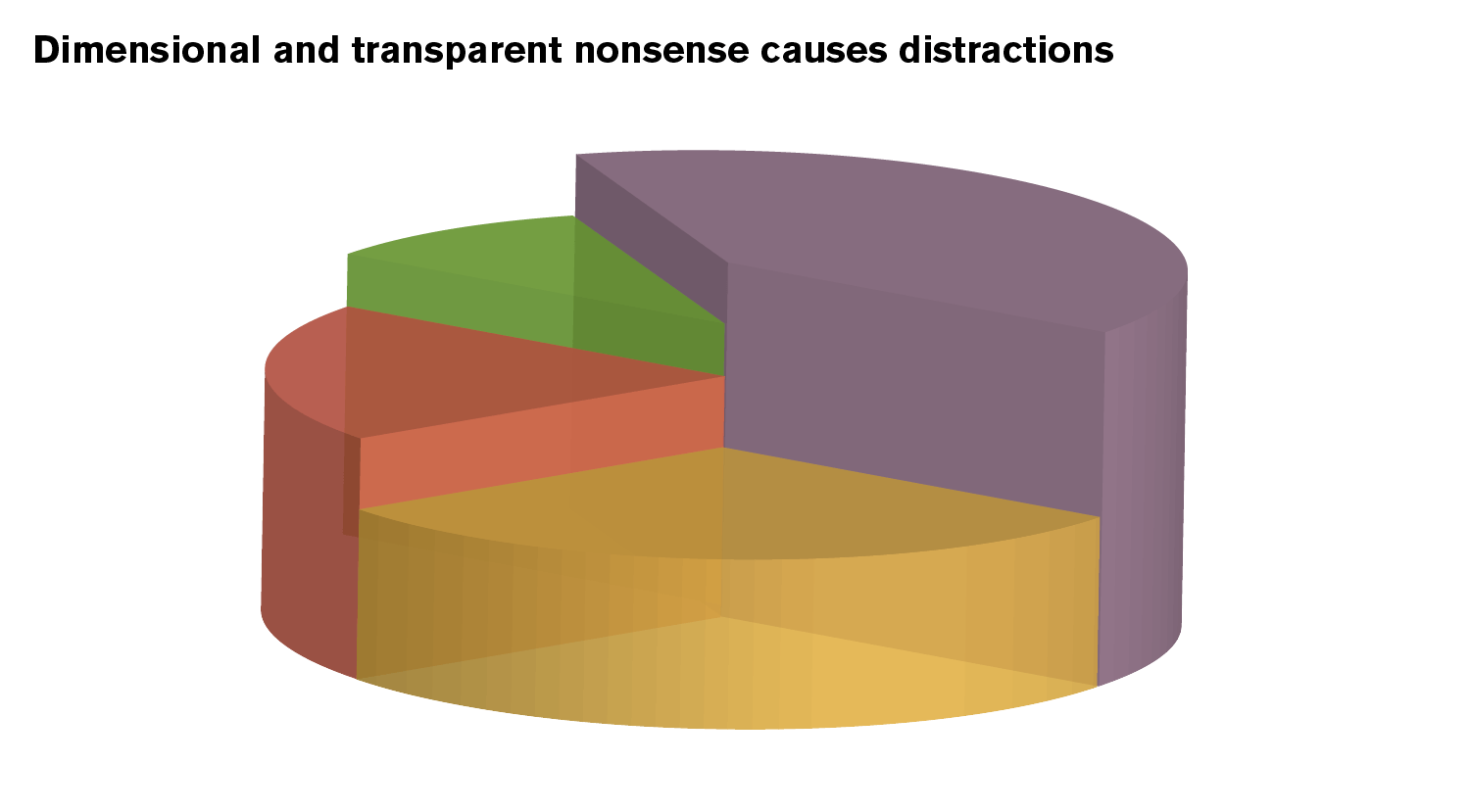 Lastly, using non-circle shapes to show fractions of a whole is a regrettable technique. If you look at the example below, you can see that the irregularity of the shapes tricks your eyes. Is the purple piece on top of the pyramid supposed to be the same percentage as the darker purple one at the bottom? Is the light orange segment on the Illinois map the same percentage as the magenta one? Such visuals obscure your data rather than clarify it. 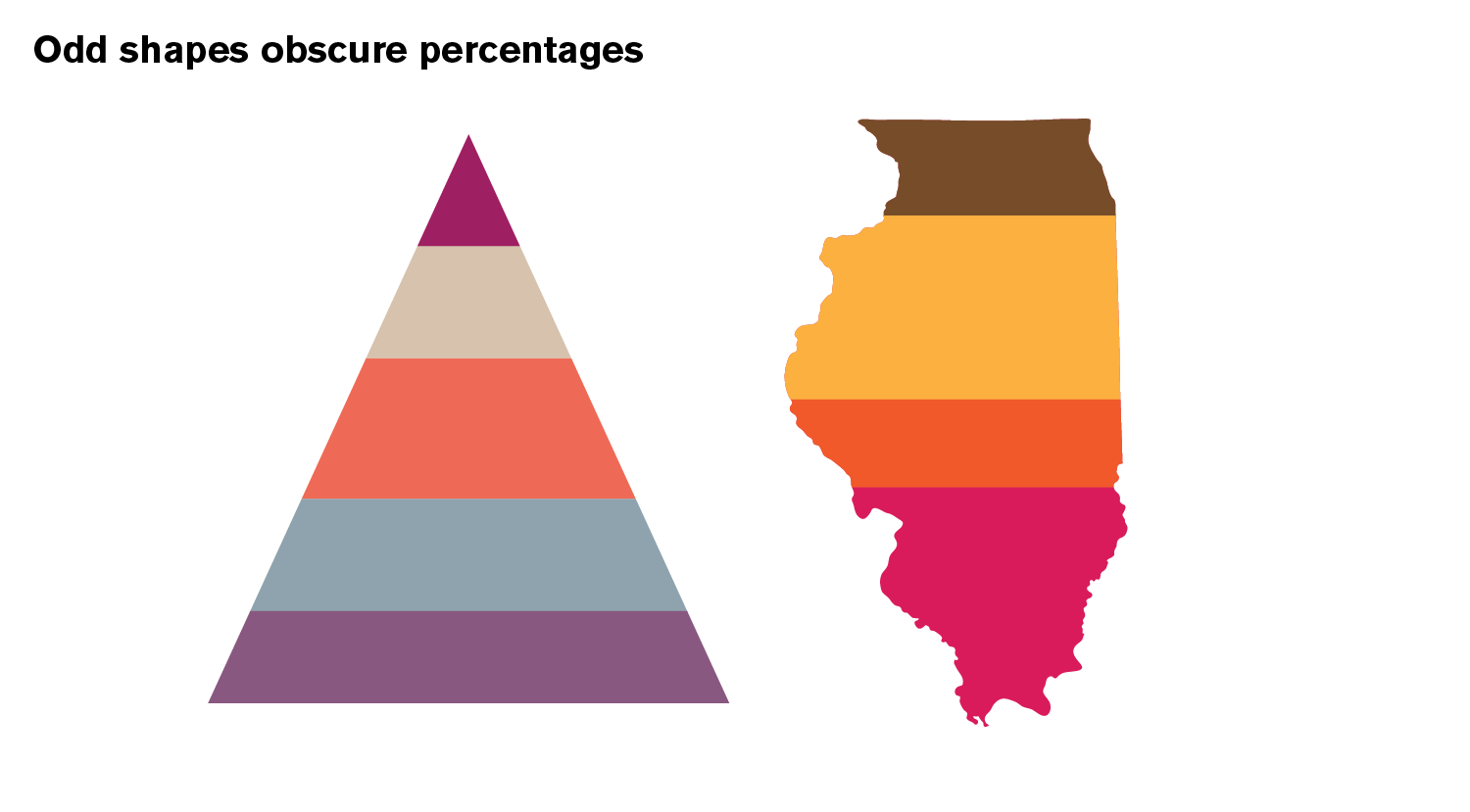 Using any of these “tricks” will make your data and, ultimately, your message harder to grasp. Skewing your charts in these ways can make the chart appear dishonest, discredit you, or make you look unprofessional.

The right way to use and design a pie chart
The ideal time to use a pie chart is when you are comparing just two, maybe three, data points—especially if one of the data points is significantly larger than the other(s). See here: 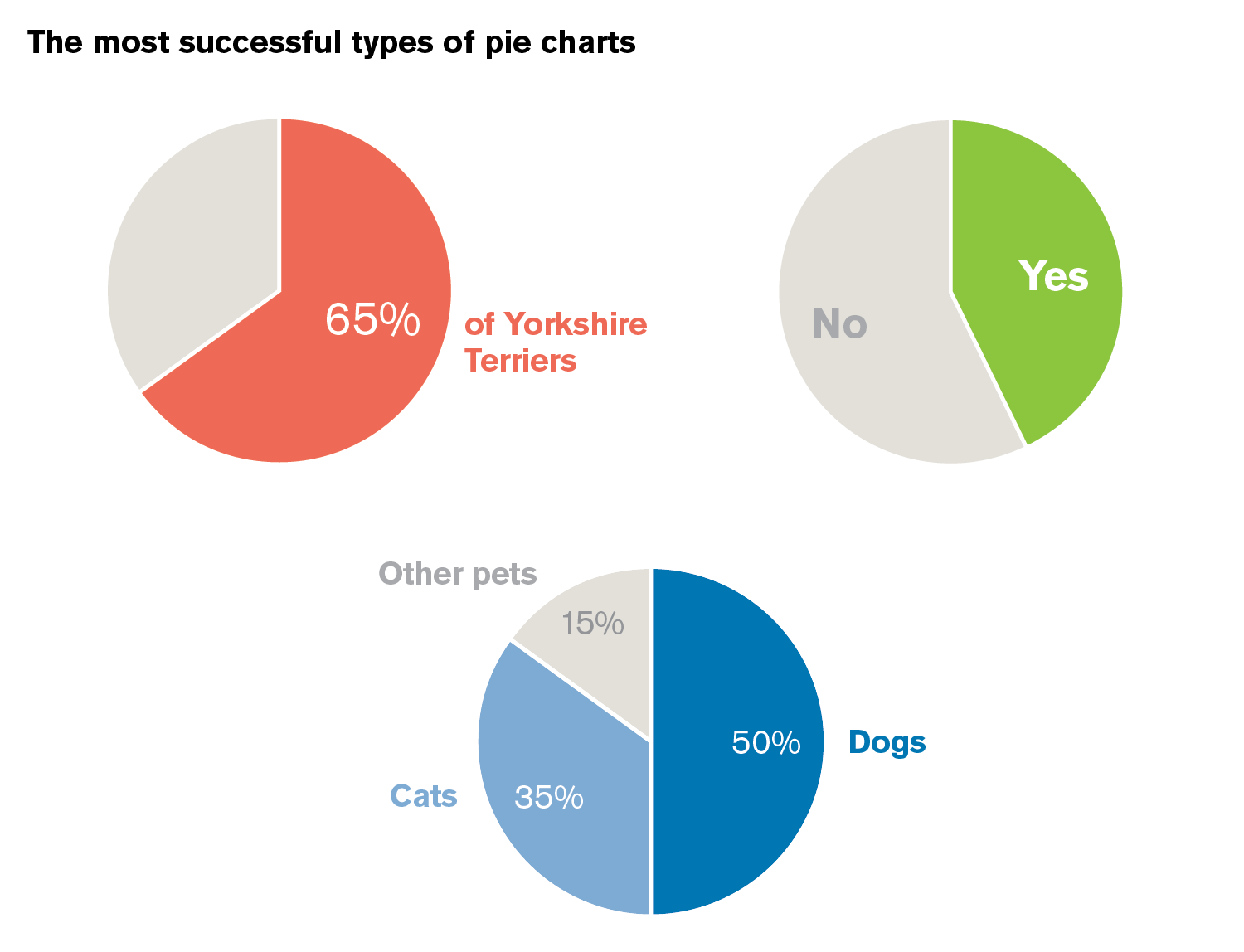 Charts with five or six pieces only work when one or two of the pieces are larger than the others so that it seems clear you are drawing attention to a particular point. If I am asked to make a pie chart that has more than six pieces, I suggest only using the top five and then grouping the rest together in an “others” segment. 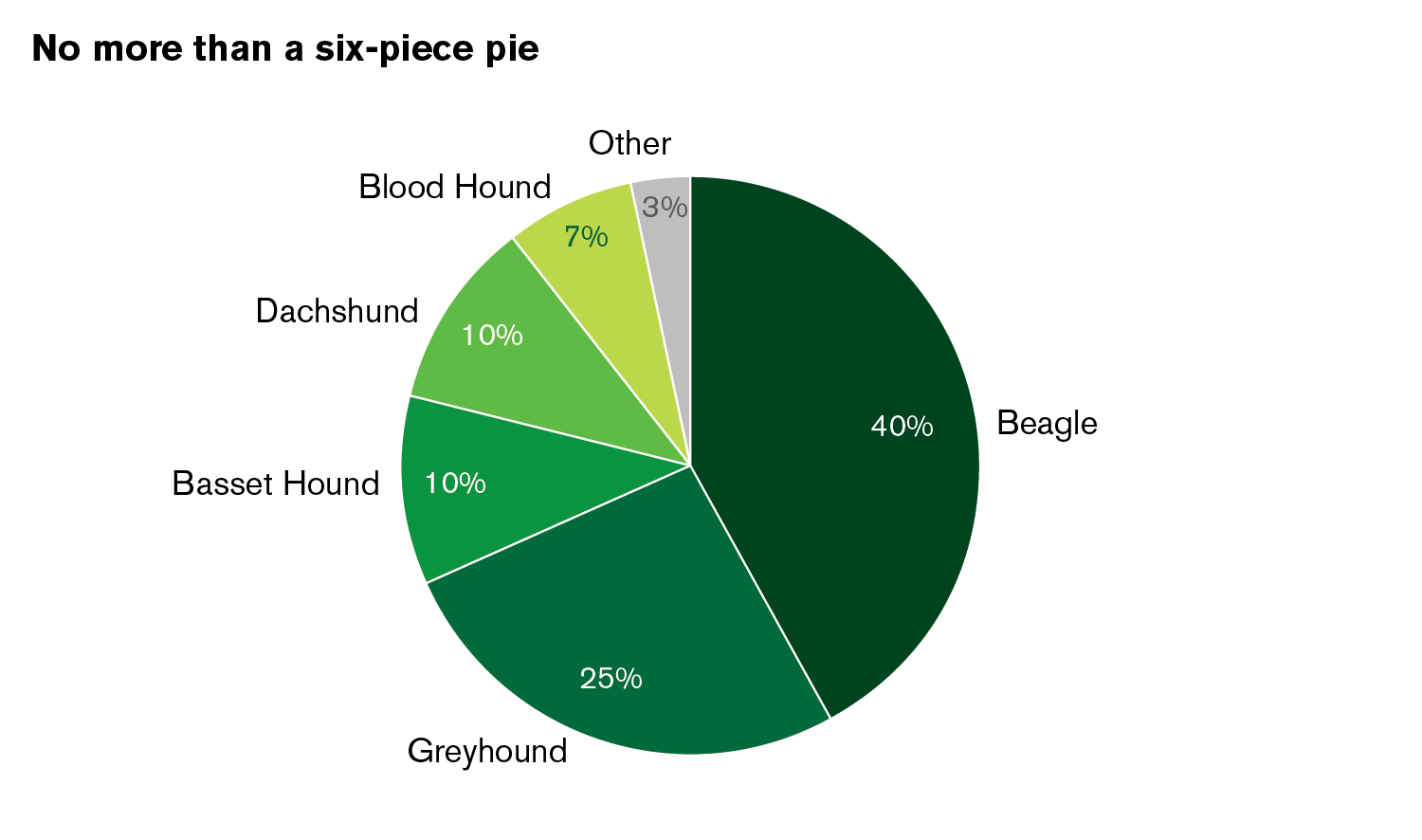 Finally, pie charts should be designed like you would read a clock. The first pie piece should begin at 12 o’clock, fall to the right, and be the largest data point. Then each piece should fall in place after it in descending order. The only exception is if there is an “other” category. This piece should always come at the end, even if it is larger than some of the others. 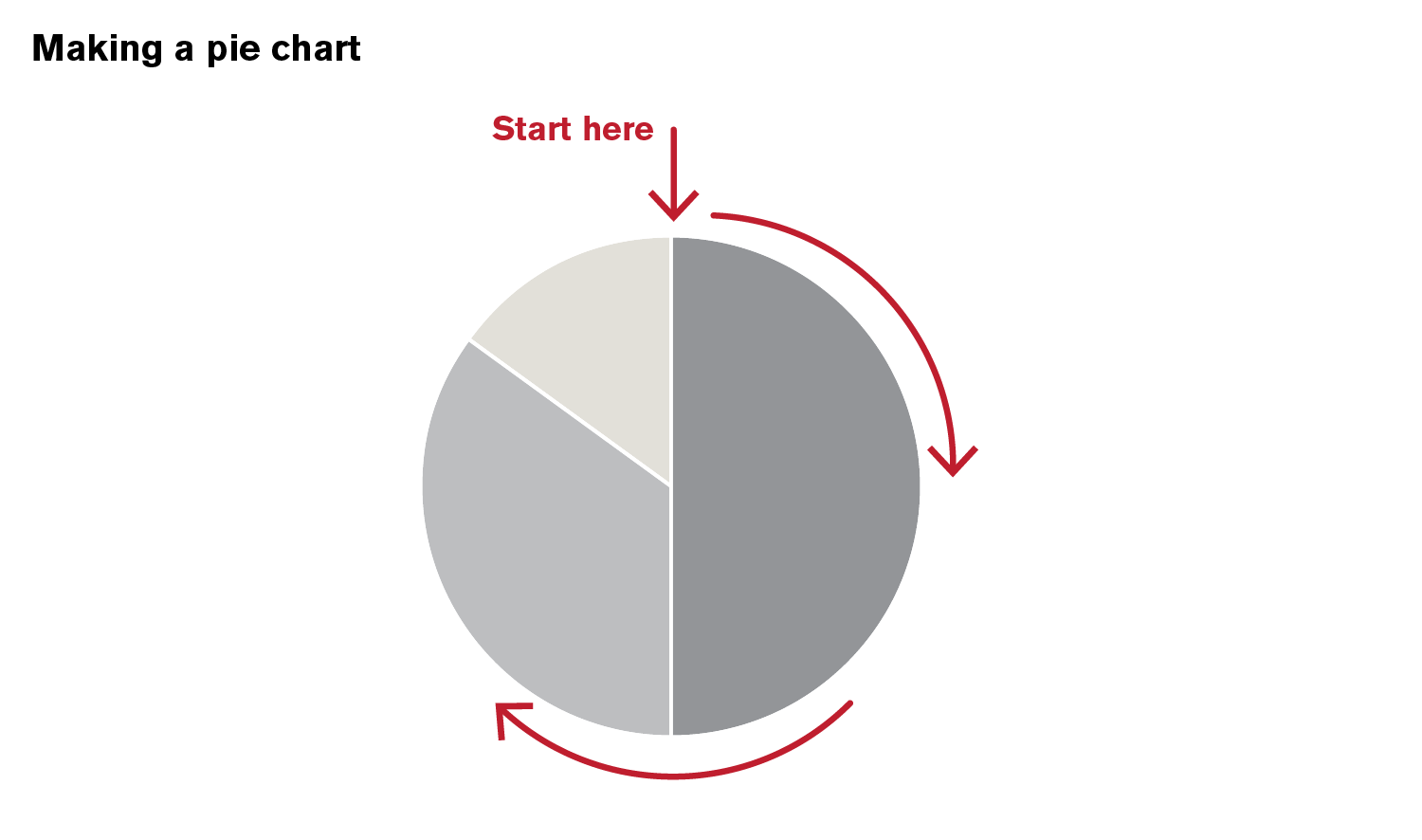 I would not recommend using a pie chart beyond these examples. You run the risk of obscuring the data and losing credibility, not to mention wasting your and your readers’ time. Simplicity is key. More often than not, a bar chart is the more appropriate choice.

Please note: All charts in this article are for illustrative purposes only, and the data is made up (except for William Playfair’s charts).