‘Tis the season to sign a handful of greeting cards, and put an end to the oft-misused apostrophe at the end of last names. Refer to Slate’s guide and send those cards with confidence. On film, rail vacations are thrilling, enchanting, and romanticized—does that hold up in real life? Also, a biography of the soul singer Mavis Staples, and a historic turn of phrase are a part of our November roundup.

“How to make your name plural this Christmas season” is an oldie but a goodie; I share Slate‘s takedown on social media every holiday season as a passive-aggressive PSA. The short version: you never, ever use an apostrophe to make your name plural. Just add that “s”! The exception is names that end in “s,” “x,” “z,” “ch,” or “sh,” as mine does; we folks add “es.” However, if you, like me, think “The Williamses” is awkward, best just stick with “The Williams Family” and leave it at that. #endrant

Journalist Bella Pollen’s eye-opening and often funny account destroys any illusion that traveling cross-country by train is a romantic experience. One need only read this description of the food offerings available: “The service is old-fashioned charming, but though the menu is sprinkled with upmarket phrases such as “signature dish” and “garden fresh,” our seafood platter and Chinese noodles are, indeed, a little bit bilious. I suggest you find salvation in the humble hot dog and order it for every meal.” 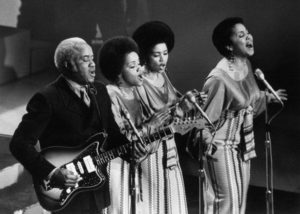 I’m looking forward to reading Chicago Tribune music critic Greg Kot’s I’ll Take You There, this year’s One Book, One Chicago featured pick. The title shares its name with the classic song made famous by The Staple Singers, an unsung, yet celebrated family singing group with Chicago roots. In the book, Kot documents the storied history of lead vocalist and activist Mavis Staples, and the family act’s peerless style of uplifting gospel and R&B that became a symbol of the Civil Rights movement.

This isn’t a new article—it was published in 2011—but a recent Netflix binge of Manhunt: The Unabomber led me to it. Ted Kaczynski, known as the Unabomber, famously used the phrase “You can’t eat your cake and have it too” in his manifesto. In an episode of Manhunt, that construction is originally regarded as a mistake by FBI analysts, since the more widely used saying had become “You can’t have your cake and eat it too.” Investigators would eventually learn that Ted’s version was more in line with the historical proverb. This article is a mini-exploration of the saying’s origins and when it was flipped to today’s more common construction.

Let us know your thoughts on these picks or share a few of your own in the comments. Happy card-signing!