More and more frequently, companies are turning to video to showcase their ideas and complement other types of thought leadership. In Content Marketing Institute’s 2018 B2B marketing report, 72 percent of respondents indicated that they used preproduced videos in their campaigns. As I’ve noted before, video has advantages over other formats, especially when trying to explain technical concepts.

One of the most common types of videos is the “talking head”—an expert weighing in on a given topic. The challenge is that while it makes sense to provide exposure to senior partners, talking-head videos tend to be dry and visually uninteresting. Very few actually cut through the clutter.

It’s safe to say that talking-head videos aren’t going anywhere. So how can companies ensure they do them right? I reached out to our video production team—director/editor Mike Russell, producer Laura Schram, and strategist/writer Alia Samhat—for their insights. The following is an edited version of our conversation.

Leff: Why do companies rely so much on the talking-head video?

Alia Samhat: These videos, while sometimes not the most interesting, are necessary. You have people who are advanced in their field. They know exactly what they’re talking about and they have something to add to the conversation—so it’s important to see and hear what they say. There’s weight to that.

One of our clients admitted that for partners, doing a video is seen as a reward if not a right. When executives write an article or have expertise, that earns time in front of the camera.

But there has to be more than seeing someone talk. How can we make it more visually interesting?

Mike Russell: A one-camera shoot really limits you; having two cameras will help. This approach allows you to edit a half-hour conversation down to the best two to three minutes and have the final product be high quality.

With this foundation in place, you can think about how to visualize interesting concepts in a couple ways. The first is B-roll—supplemental footage that supports what your expert is talking about. After you’ve done your interview, you can go out and film what you need. We often capture as much footage as we can in the time that we have.

Another approach is to use motion graphics as an extra element to help tell the story. And it doesn’t always have to be really advanced 3-D graphics; the visuals could be simple, from shapes to icons or animated charts that help tell a story and highlight the main points.

Leff: What advice would you give to experts who are going to be on camera in order to get the best performance out of them?

Mike Russell: First, it’s on the interviewer to make the expert comfortable. You want to make the footage as conversational as possible while giving the interview subject confidence in the process and end product. This isn’t the 30-second sound bite for the 6 o’clock news. We’re going to edit the footage and come at the subject from a few different ways, so they don’t feel like they have to get it right every time.

Laura Schram: There are also production approaches that can put them at ease. For example, having a person talk directly to camera can be effective in instances when you really want the expert to come across as if he or she is talking to your viewer.

I did this for a video with a ton of A-list celebrities, and I can’t tell you how many had never seen it or commented on how much better the experience was than just talking directly into a lens.

Leff: How can companies get the most out of their investments in video when they’re taking a talking-head approach?

Laura Schram: By far the most expensive days are your production days, so you want to maximize those as much as possible. You’ve got the crew for anywhere between 8 to 10 hours, so you might as well make use of the time. I always tell clients to think about not only bringing in more subjects, but perhaps having your main interview subject speak to more subjects than just the one for this one particular video. There could be many uses for it down the line. We also always try to get some B-roll and extra shots.

When you really have to maximize that person’s time, you want to have the proper amount of crew. If you’ve got a CEO who only has 25 minutes, for example, you want to have enough crew to make set-up quicker and easier and create a more visually appealing end product.  If you have a little bit more time with your subject, you likely don’t need as many people on set to execute that interview.

Alia Samhat: Some of the best results come from scripting or pre-interviews with your subject. If you have an expert for only 20 minutes, make sure to have some concrete options for getting a hook that will serve as your opener.

Leff: What’s the maximum length that a talking-head video should be?

Mike Russell: I always say that a video is as long as it needs to be, though it also depends on the viewer and setting. And in the YouTube age, videos are obviously becoming much shorter, and attention spans are narrowing. If you’ve got just somebody talking on screen, it might only need to be seven seconds. The topic and objective also matter. Is it about a new software release? You may have more time to go into depth. Is the video showcasing findings from a six-month research effort? There I’d say two minutes tops, assuming the video’s objective is getting people to read the full research report.

Laura Schram: People have a hard time watching something that’s more than three minutes. A five-minute video doesn’t sound that long when you’re producing it, but that’s a really long time to hold a viewer’s attention.

Alia Samhat: We recently conducted a video content audit, so we saw the full range of quality. I watched a couple talking-head videos that stood out, and they were all 90 seconds or less. The best ones also had some upbeat music to create some energy and aural interest and some graphic element, too, to create some movement. Think too about how we’re used to watching videos—YouTube has ad overlays, sites have pre-roll ads, cable news has crawls and chyrons. If you just put someone in front of a wall and ask them to start talking, it’s going to be far less visually compelling than what people are used to.

Very few videos, especially talking head videos, should be stand-alone. They should be either an introduction to a longer-form piece—an article or a report—or part of a suite of content on a topic. You don’t need the video to do everything, but it needs to be super targeted in its focus. 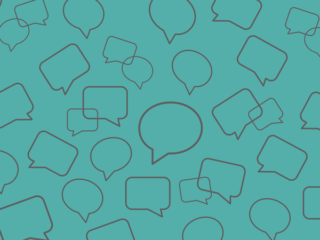 Previous Post (p) How to approach graphic design: A Q&A with Jake G. 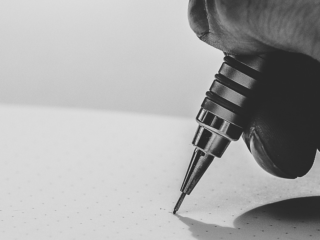 Next Post (n) Thinking about a rebrand? Seek an outside perspective