This past September my boyfriend and I packed up and moved to Los Angeles. Three days, more than 2,000 miles, and copious amounts of caffeine later, we arrived in sunny “SoCal.” And I hence became the first full-time remote employee at Leff.

The transition has been a challenge—remote working sounds more glamorous than it is. However, Leff is the kind of company that puts in the time to make its employees feel connected, whether in the office or not. Through this transition to life on the West Coast, I’ve learned companies can do a few things to keep remote workers engaged and away from searching job postings.

The longer a remote worker is on their own, the more important video (aka a portal to the outside world) and a good phone connection become. We have weekly full-team and editorial meetings on Mondays, and while our one-speaker system may have worked in the past, the larger our team has grown, the harder it is to hear everyone and feel like you’re part of the group. After talking with my boss Heather, Leff invested in some better speakers. #AwesomeCoworkers

Phone calls with multiple parties can be awkward. Because you can’t read people’s body language, you might talk over one another or, conversely, suffer periods of silence when everyone thinks someone else is going to speak. This is just one reason why I’m a fan of checking in with people before phone calls—especially calls with clients. This way, everyone has clarity on what their role is and what questions to ask. When coworkers are in the office, these kinds of check-ins typically occur 30 seconds before dialing in, and they were likely preceded by other one-off conversations or discussions over the cubicle wall. But with remote workers, that kind of quick touch base is easily overlooked.

It also doesn’t hurt to be more directive with comments during calls. This approach is especially helpful if you can’t look across the table at your colleague, but it applies to both remote and in-office workers. For instance, before wrapping up a client phone meeting, the call lead should ask, “Anything else we should address?” or “Jake, what do you think about this point?” This way, you avoid cutting someone out of the conversation and ensure your colleagues don’t become the silence on the other end of the phone line.

Last, in large team meetings, try to limit cross talk. When you’re on the other end of the line, such conversations not only are impossible to follow but also can be ostracizing.

At Leff, we regularly hold one-on-one meetings between managers and team members. This kind of meeting fosters a sense of support and is also a great forum to discuss general concerns, project sticking points, or new ideas for working.

When coworkers are in the office, holding these kinds of meetings every other week or once a month is fine, but when you have remote workers these sessions can be a lifeline. As a result, I strongly recommend having these check-ins once a week for remote employees. They don’t need to be long, just fifteen minutes will do in many cases. However, committing to these meetings and having them on the calendar is important. From the employee perspective, it shows us that our company or boss is invested in our career and job satisfaction. And from the manager perspective, you’ll be more tuned in to how your employee is doing and can address any small issues before they become big ones.

Let the phone make a comeback

Email, Gchat, texting, and other forms of instant messaging mean you can still have constant communication even if a coworker is thousands of miles away. However, these types of interactions often don’t convey the tone or nuance that you get from hearing someone’s voice. Plus, sometimes it’s just easier to talk something out via phone—whether it’s a point of contention or simply an article idea.

According to Guhan Subramanian, the director of the Harvard Program on Negotiation, talking something out via phone allows you to resolve things more quickly. “In any discussion, ‘people are asking questions, probing, asking follow-up questions,’ he says. ‘It’s obviously a lot easier to do when you’re over the phone or in person, compared to by email or text.’”

Get people in the office

The hard truth is that no number of video chats, phone calls, and fun email chains can replicate the camaraderie you get by being in the office. To make your coworkers feel like part of the team, companies need to ensure they get remote workers into the office on a regular cadence.

Like arranging a meeting, make sure to agree on a schedule that works for your remote employee, rather than making decisions impromptu. Doing so will make sure these visits happen, and it gives your employee time to make plans and take care of any personal scheduling. Plus, knowing that they’ll be back in the office with their team every three months, for example, gives remote workers something to look forward to! From the office side, it’s also important to make sure these visits are more beneficial than they are disruptive; for instance, is there enough seating?

Whether it’s for a client meeting or the company holiday party, find reasons to get remote workers into the office. It’ll remind them why they wanted to work there in the first place.

Rachel is an editor at Leff. Her background as marketer in the startup world means she understands the term “ordered chaos.” She works with the editorial team to help shape ideas into valuable and insightful content, while keeping a sharp eye out to ensure style guide consistency. 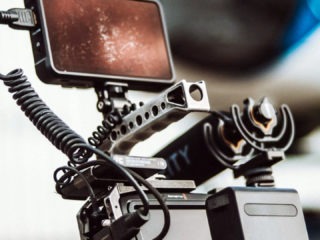 Previous Post (p) Shooting on a smartphone? Don't do it alone