As editors, we have to make sure authors choose their language carefully and thoughtfully. In a global context, this becomes even more important—when discussing various places, peoples, and cultures, it’s critical that our word choices convey a deep understanding of the world around us. To that end, accuracy and sensitivity to geopolitical and cultural contexts are essential to writing with credibility and empathy.

As the COVID-19 pandemic unfolds, we’re seeing what happens when irresponsible or careless choices in language are made. Referring to COVID-19 as the “Chinese” or “Wuhan” virus not only is confusing (as it refers to neither the cause nor the target) but also opens the door to unjustly assign blame and fear toward people of Chinese or Asian descent. Similarly, when you consider that the 1918 flu pandemic likely broke out in Central Europe, spread all over the world, and affected people indiscriminately, the “Spanish” flu is clearly a misnomer.

Below are some of the most common geography flubs and thus areas to keep in mind when producing content.

Ignoring political tensions is perhaps the greatest reputational blunder. Assume that your audience is informed and will have an opinion on global events. Calling people in Northern Ireland “British” amid Brexit, disregarding the recent bushfire disaster in a piece about real-estate development in Australia, or overlooking New York City’s status as the US epicenter of the coronavirus pandemic in the context of healthcare could very likely alienate some readers. So would being oblivious to developments about Aleppo, Yemen, or the Kurds.

Yes, it’s difficult to keep up with global news, but in an era of globalization, it’s more important than ever to know what’s happening around the world—or to at least run pieces of content by people who do know and can ensure you’re not overlooking or misrepresenting anything or anyone. At Leff, we hold regular workshops to discuss world events and how they’re perceived—particularly outside of the United States.

Across the world, the concept of diversity can be incredibly complex. For instance, China has more than 50 ethnic groups, a couple hundred spoken languages, and dozens of religious observations. The Caucasus, a region in Western Asia a fraction of the size of China, has just as many ethnicities and religions.

When it comes to word choice, simplifying these differences to just “Chinese” or “Russian” could be viewed as trivializing millennia-long cultural histories. At a higher level, these points can be especially sensitive amid current tensions in Hong Kong.

Assuming everyone shares your cultural sensibilities or references

Sometimes Americans default to using idioms, referencing American pop culture, or using US-centric terminology—for example, by comparing the size of something to a quarter or a baseball. Another way this shows up is in terms that are used globally but may have different meanings. For instance, in US English, the term “Asian” typically refers to someone or something from Southeast or East Asia (for example, Korea or Vietnam); in UK English, the same term encompasses South Asia (for example, India). Such distinctions are important if you’re writing for a global audience.

As editors, we know the power of words. We know they represent both concepts and people, and we take care to accurately reflect the groups that such words speak for. One critical thing we work to avoid is abusing demonyms—words that denote origin, for example, using “Danish” or “Dane” to refer to someone from Denmark. Demonyms are useful when referring to residents of a region but using a culture as an adjective can result in associating something with that culture—as well as conflating its government, general population, and culture. As mentioned, referencing COVID-19 as “Chinese” conflates the country of China, its government, people in China (not all of whom are Chinese), and people of Chinese and East Asian descent.

Elementary fact-checking is easy yet woefully underutilized. This research goes beyond making sure a country’s capital is correct—though that’s still important. Consider that St. Louis is an independent city (meaning that it does not sit within a county) and therefore has different tax, judicial, and urban-development systems than other cities; more importantly, it cannot be compared with cities or counties across the same metrics. Skipping this kind of research can lead to incongruent comparisons that undermine otherwise thoughtful arguments.

Geopolitical awareness doesn’t just apply to content. Photos are powerful aides for setting a tone or illustrating a point. That’s why it’s so important they’re accurate—and why it’s so frustrating when they’re not.

One example would be exclusively using images of New Orleans in a piece about Louisiana. While NOLA is recognizable, authors should avoid reducing an entire state and its population to a single city. Similarly, images of the Berlin Wall are still used to illustrate modern-day Germany, as are snowy images of now-grassy Alaska. In addition, seemingly innocuous natural features or cityscapes routinely misrepresent a geography, whether it be using an image of Shanghai in an article about Hong Kong or substituting photos of the Appalachian Mountains for the Urals.

If the right image does not serve your (maybe, aesthetic) purposes, then choose a different angle—but do not use an incorrect or reductive image thinking no one will notice, because they might.

Most maps adhere to the Mercator projection, which warps countries’ and continents’ size to accommodate for the globe-to-chart conversion. Effectively, the farther away from the equator or prime meridian, the larger a landmass will appear.

The GIF below demonstrates the distortion. Alaska and Australia appear to be the same size, even though Australia is approximately five times larger. Russia appears to be the largest country in the world by landmass, which it is, but it also appears to take up most of the largest continent (Asia), which it does not. And exactly how big are Antarctica and Greenland?

Beyond simple confusion over size, these kinds of distortions can mean that we subconsciously present information about certain countries or areas at disproportionate scales. They are also why we tend to associate “north” with “up,” which has historically promoted dichotomous biases—for example, up, light, big, good (north), and down, dark, small, bad (south). Avoiding these biases is simple, though: do your research and don’t make false comparisons.

Content creators seek to inform and engage the reader, so we must also be informed and engaged ourselves. In a rapidly changing global economy, that means doing our homework. Only then can we communicate with the knowledge and empathy required to make an impact. As we endure and battle the COVID-19 pandemic, the stakes for accuracy are now higher than ever. 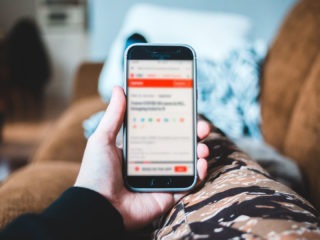