When we moved into our office three years ago, I insisted on having this framed photo in the sight line from my work space: 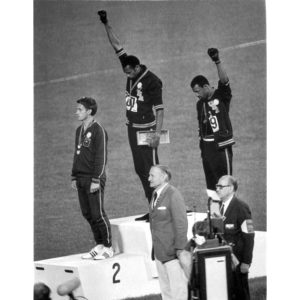 I had long been aware of its historical significance, and its relevance became deeper during my time with Chicago’s Olympic bid. It reminded me that no matter how my day was going, my problems were dwarfed by the larger issues in society and the actions that heroes took in the fight for justice.

I thought about it in light of the events of the past week: the senseless killing of another unarmed Black man at the hands of the police and the outpouring of rage that followed in the protests—first in Minneapolis, then across the country.

When John Carlos and Tommie Smith took that podium in 1968, they were ready to sacrifice their accomplishments, their medals, and their future. Their cause: How can America exalt the athletic achievements of Black athletes when it wasn’t ready to extend basic human rights to Black people in everyday society? Carlos and Smith paid a significant price for the ensuing four decades. They may be folk heroes and icons now, but it was only after decades of being persona non grata.

Fifty-two years on, after the events of this weekend, I wonder if they feel like their actions were in vain. How weary must they be to know that the same issues they were protesting against persist? And would they have made a different choice had they known?

Many of us, particularly white people, can avoid making these issues a priority. It’s far too easy to turn away from people in the streets and turn the channel when injustice intrudes upon our lives. But that has to end now. As Solomon Burke sang, none of us are free if one of us is chained. Progress requires people who are part of the power structure and system to make common cause with the aggrieved and powerless.

I have tried to live my life by example—to welcome all people with an open mind, to learn from others’ experience, to champion those diverse voices, and to raise children who celebrate our differences.

But at this moment, I realize that’s not enough. If I’m not willing to actively promote values that lift everyone up and support movements that can effect change, I’m just sitting on the sidelines.

We’re a content marketing company. We don’t influence policy, and our battle is not on the front lines of social justice. But that doesn’t mean we can’t individually and collectively support the forces that are intent on bringing about real and lasting change. We are considering what kind of meaningful action we can take, determining how we can better educate ourselves, and identifying organizations to support. We are asking readers to join us, make recommendations, and engage in this dialogue—there is strength in numbers.

In a few years, I want to look at that iconic photo from 1968 and see it as an important milestone in the fight for equality, not as a reminder of our collective failure to right the most grievous ills in our society.

Updated June 4, 2020: A list of resources, including vetted organizations taking donations, can be found here.