Given the complexity of language, it’s impossible to score one hundred on the test. Wires are bound to get crossed, both in conversation and in writing. As a copy editor, spotting such missteps constitutes most of the work I do, with the goal of ensuring clear and concise communication. While potential errors are diverse, one of my favorite grammatical hiccups is the dangling modifier. These subtle syntactic idiosyncrasies occur when a phrase intended to describe or clarify fails to connect to the correct subject, often because that subject is missing. And let me tell you—hijinks can certainly ensue!

Various types of phrases can lead to a dangling modifier, including participial phrases, prepositional phrases, and adjectival phrases. Consider the following examples:

• Having driven to the vet, Rover was understandably anxious. [participial]

• With a cheer of excitement, the ball flew through the uprights. [prepositional]

• Glistening as ever, I was blinded by the countess’s jewelry. [adjectival]

Dogs shouldn’t operate vehicles, footballs aren’t capable of complex emotions, and I have yet to emanate light. As such, these sentences are misleading and should be recast, leaving no room for ambiguity or misinterpretation. This requires ensuring that each modifier has a referent and reordering phrases to put these pieces as close to one another as possible. See below:

• Having driven him to the vet, Rover was understandably anxious.

• The crowd cheered with excitement as the ball flew through the uprights.

• I was blinded by the countess’s jewelry, which was glistening as ever.

Of course, these examples are straightforward and could be easy to spot. It’s much harder to notice you’ve written a dangling modifier in long or complex sentences, which are not uncommon in thought leadership (though we always advise against overly long sentences). Such errors can lead to confusion and even embarrassment, depending on the context.

Knowing how to spot dangling modifiers is just one important skill to get you closer to clear and articulate writing—and closer to acing the test. If you want to avoid vehicular canines and sentient sportsballs, beware the dangling modifier. 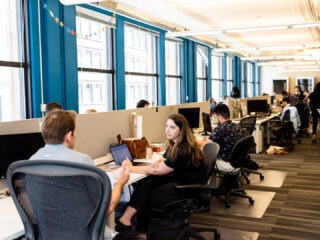 Next Post (n) Leff’s picks: The absolutely toxic malarkey of diet culture and other spooky things