Preachy blog posts, smug tweets, and groaning students all share in their disdain for the semicolon. Why? Because it’s hard to use. And it’s harder still to understand the mark’s purpose. The semicolon is so maligned—humorously by some and passionately by others—that there’s now a small subgenre of blogs and tweets (to which this post belongs) that comment on the disdain itself. Author and historian Cecelia Watson even wrote a book about semicolons, which was largely sold on their contentiousness. Sorry, en dash; maybe one day you’ll have your moment in the spotlight.

As stated, people’s strong, largely negative feelings about semicolons stem from the perception that they’re hard to use. After all, why should you use a semicolon when a conjunction-comma, period, or em dash would suffice?

Just as you would reach for other punctuation marks for specific reasons, the same is true for the semicolon. It has its place. As Mark Twain once said, “The difference between the almost right word and the right word is really a large matter—it’s the difference between the lightning bug and the lightning.” I see no reason why the same cannot be said for punctuation.

The comma-conjunction is for continuation, and it offers a linear sequence for a sentence to go from Point A to Point B. The period brings one idea to a close and shifts focus to the next. An em dash introduces a reversal—chaining two ideas together for the sake of showing their distinction. The semicolon, though, brings ideas together; it links concepts and shows that the meaning of a sentence can be greater than the sum of its parts.

Writers have been using the semicolon to this end for centuries. Would the prose of writers such as Virginia Woolf, Jane Austen, or Henry James be as dazzling were it not for the subtle harmony of a well-semicolon’d sentence?

Perhaps the greatest novel in the English language to feature multiple semicolons per page is none other than Herman Melville’s Moby-Dick, which, according to Watson, uses semicolons like “sturdy little nails” that keep the hull of the narrative’s proverbial ship intact. No character speaks as many semicolons per line of dialogue than Ahab, the monomaniacal ship captain bent on his mission to slay the titular whale. Despite his self-professed mania, Ahab has some of the most beautiful lines in the novel, rich with subtle linguistic flourishes and garnished by well-considered semicolons.

Take, for example, his famous passage from the climactic confrontation with Moby Dick at the end of the narrative:

“Towards thee I roll, thou all-destroying but unconquering whale; to the last I grapple with thee; from hell’s heart I stab at thee; for hate’s sake I spit my last breath at thee.”

Here, we have Ahab’s thunderous battle cry, rich with a Shakespearian poesy that nearly burns off the page as you read it. The disparate elements of the sentence form an intricate tapestry held fast by each semicolon; the repetition of “I” and “thee,” the flickering alliteration, the euphonic assonance of each clause—“last grapple,” “hell’s heart,” “hate’s sake”—are all enhanced by their conjoining to form a three-fold invocation of the elemental wrath of Satan himself. No other sentence construction could have hoped to pull off such artistic and emotional resonance.

For another, perhaps more gentle example from the novel, let’s look to an earlier passage where the narrator, Ishmael, slips into one of his frequent introspective reveries:

“Consider the subtleness of the sea; how its most dreaded creatures glide under water, unapparent for the most part, and treacherously hidden beneath the loveliest tints of azure. Consider also the devilish brilliance and beauty of many of its most remorseless tribes, as the dainty embellished shape of many species of sharks. Consider, once more, the universal cannibalism of the sea; all whose creatures prey upon each other, carrying on eternal war since the world began.

Consider all this; and then turn to this green, gentle, and most docile earth; consider them both, the sea and the land; and do you not find a strange analogy to something in yourself? For as this appalling ocean surrounds the verdant land, so in the soul of man there lies one insular Tahiti, full of peace and joy, but encompassed by all the horrors of the half known life. God keep thee! Push not off from that isle, thou canst never return!”

Here, Ishmael asks us to imagine the symbolic distinctions of land and sea and how they are mirrored within our own psyche. The contrasting elements of the violent ocean and the “most docile” land are paralleled by our own inner wells of what William Blake would describe as “innocence” and “experience.” This relating of sea and land; exterior and interior; and innocence and experience is instigated by clause-linking semicolons in such a way as to imply a Hegelian synthesis between the contrasting elements: the sea could not be gruesome if not for the tranquility of the land; the soul could not know horror if it did not know peace; the outer world would not be recognized if not for our own interiority.

Are semicolons complicated? Maybe. But they exist for the sake of complexity; for the sake of subtlety, nuance, and elegance. While one can still be a fine writer if they eschew semicolons, I would challenge them to, by way of the semicolon, explore the full (and sometimes maddening) potential of our language. 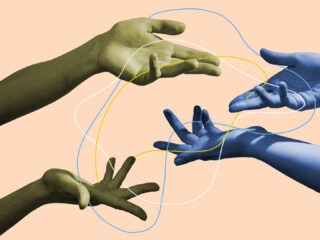 Next Post (n) How project managers can build trust with clients