It’s that time of year when I like to pause and reflect on all the terrible jargon in thought leadership that’s accosted my eyeballs over the past 12 months.

I see two different classes of jargon. First are the truly extreme cases—the “nightmare words,” as my colleague Claire calls them. To name just a few that we’ve seen recently: assetize, productize, uniquification, and servitization. Such words could only be conjured from the depths of consulting hell, and while they’re blasphemous, they’re also somewhat rare (though not rare enough). At least, I don’t expect assetize (which definitely means the process of making something more ass-like, right?) to become a thing.

And then there are your everyday horrors. These words are like a snowball rolling downhill—small and almost subtle at first but gaining momentum and size steadily as time goes on until they become a threat to everything around them. At first, you see them once or twice and casually swap them out for a real English word. But before you know it, they’ve made their way into every piece of writing—maybe even every other paragraph. And when these words are rampant, other jargon starts to slip in, too. Soon enough, entire paragraphs are indecipherable. You may think I’m exaggerating, but I’m not.

Below, I round up some of these everyday jargon words that have entered the scene or have become much more common over the past year, to the detriment of all.

Drive: I gave this one a nod in my 2020 roundup, so, no, this is not a new term. But this word has become omnipresent in thought leadership articles over the past several years, and I couldn’t ignore that. We’ve got folks driving everything—procurement innovation, green infrastructure development, value (see below). It’s tiring seeing the same word over and over, and there are often (read: almost always) more appropriate verbs: impel, operate, foster, push, propel, guide, steer. Get creative, people!

Value creation: As in, “Organizations should have a clear understanding of how a merger would drive value creation.” My first qualm with value creation is an age-old one: why use the noun “creation,” which then requires you to introduce another verb, when you could just say “create value”? Second, and more importantly, what is this value? Most of the time, it’s some sort of economic value, but be specific.

Spend: If you want to light up a room of editors, ask them how they feel about “spend” as a noun in the place of “spending.” As in, “As a result, marketing spend as a percent of sales would be relatively low.” What’s the big deal, you may ask? Yes, the meaning is clear. But there’s the fundamental question of why make up a new word for a word that already exists?

Enabler: I long for the days when “enablers” were people who pressured other people to do something questionable. What a pure time it was! Enablers now take any number of forms, including optimized processes, IT functions, and agility. Gag.

Players: Words like “players” and “stakeholders” are used in the place of the more human-sounding “people” or more specific words to describe who a piece is talking about. This is the worst kind of jargon: the kind that takes something quite specific, be it insurers or public-sector agencies or construction companies, and replaces it with a generic term that tries to mean everything so it doesn’t really mean anything. As always, precise language should be the goal.

Of course, these are my particular pet peeves. Let us know what words you think are the greatest recent offenders. And whatever you do, beware the mixing up of parts of speech. Just because Shakespeare got away with nouning a lot of verbs doesn’t mean you can.

Previous Post (p) Leff’s picks: How to pass the time this holiday season 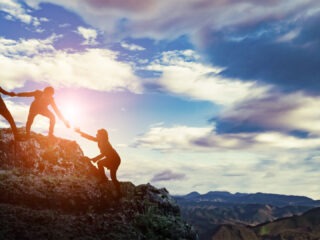 Next Post (n) Embracing change and growth: Reflections on 2022