I’ve spent decades dealing with the misspelling of my given name. I have no idea why my parents spelled the name in an uncommon way. But I can’t pin the blame on them for your carelessness, dear reader—although it appears some parents go out of their way to create spelling confusion.

Lighten up, you say, it’s no big deal. Better to get worked up over things like climate change or why people don’t know there are two “c’s” and two “m’s” in accommodation. Besides, even people who can’t spell hamburger can become president of the United States.

In fact, I’ve always accepted the misspelling good-naturedly. But something pushed me over the edge recently. I have a relative—let’s call her Cousin B—who has known me for all of my 66 years. I texted her to wish her happy birthday. “Thanks, Allen,” she responded. Ugh. And it wasn’t the first time. My cousin is like a sister to me, and I love her dearly. So it stings even more that she can’t spell my name correctly after all this time.

I am hardly alone. Many names are the victims of tortured spelling, especially in increasingly multicultural societies (mispronunciation is a whole other story). I asked some colleagues at Leff about their name misadventures:

• “My name is Jennifer. My nickname is Jen. Please don’t spell it Jenn. This drives me nuts. And don’t call me Johnson, as someone once did.”

• “My name is Scott Leff, but people constantly call me Jeff, Jeff Leff. In many ways, Jeff is no worse than Scott—square, white names that say almost nothing about the person to whom they are affixed. And yet being called Jeff still feels like a slap in the face.”

• “My name is Alyssa Abkowitz. A former boss of mine spelled my last name as Abobkowitz, and he also would say it that way. It was awful. And Alyssa has definitely had an ‘i’ instead or an extra ‘s.’ And then in one email my name became Alice. In my next life, I’d like a last name like Smith. My married last name isn’t any better—Cendrowski.”

• “My name is Tiana, but apparently not at Starbucks”: 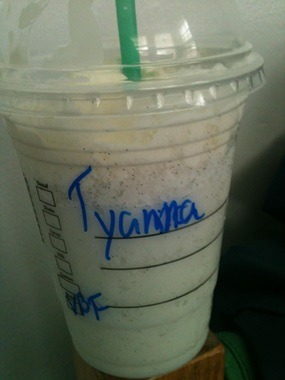 Perhaps we should attribute this phenomenon to the debasement of the English language and communication skills. For example, we’re in such a hurry to finish an email that we can’t be bothered to double-check a spelling. Then, there’s the challenge of writing a typo-free text on an iPhone.

Others see the lack of attention to spelling names correctly as a form of microaggression. And Tiana’s not alone—some people speculate that Starbucks baristas intentionally misspell your name as a marketing ploy of some kind (false, the company says).

Whatever is going on, it’s probably true that people have been misspelling names since the days of Shadrach, Meshach, and Abednego. (And no one dared misspell the name of Nebuchadnezzar II.)

When it comes down to it, misspelling someone’s name—regardless of its rarity or complexity—is disrespectful. From a commercial perspective, it’s hard to build business relationships when you can’t even get your counterpart’s name right. In journalism school, the professor gave you an F on the assignment if you misspelled a name. (But even journalism schools screw up.) Copy-editing tests routinely include traps, such as misspelling the first name of the well-known performer who sings “People.” As the j-school professors reminded us, if you can’t spell a name correctly, why should we think anything else you write about is accurate? And yet, we’ve all probably been guilty of it at one point or another.

So how can we do better? At bottom, it’s not that complicated:

• Review your email text (or other form of correspondence) before you hit send.

• If you’ve sent the email and then realize you have misspelled someone’s name, just send an apology email. (That’s what my son’s very proper former preschool teacher did when autocorrect rendered my wife’s Polish diminutive, Ania, as “Dear Anus…”) The recipient will appreciate your gesture.

• If you’re writing an email and you’re in doubt, you can always apologize in advance (“Sorry if I have misspelled your name”).

Another thing: You can call me Al but only if you’ve known me since Eisenhower was president. Like my Cousin B.