People who edit for a living often end up down obscure grammatical rabbit holes, passionately arguing about the placement of commas or hyphens or the capitalization of certain words. That’s because authors of thought leadership seem to have one overriding concern: the fear of looking silly. It’s an obsession that manifests in three primary ways.

First, whenever editors seek to make complex content more readable and understandable, someone somewhere inevitably complains we’re “trying to dumb it down.” Incomprehensibility doesn’t equal intelligence. As Ernest Hemingway famously retorted, shoving William Faulkner down a deep well, “He thinks I don’t know the ten-dollar words. I know them all right. But there are older and simpler and better words, and those are the ones I use.” Less elegantly, I once had a colleague describe an author as having “swallowed a dictionary, and he now spends his whole life throwing it up.”

The second clue is the use of jargon, which a lot of authors insist shows they really “get” the industry they’re writing about. Wharton professor Adam Grant has a typically astute take on this, noting “jargon isn’t a sign of expertise; it’s a signal of insecurity.” He then cites a paper which examines nine studies and finds “when people lack status, they resort to unnecessarily technical language in an attempt to look smart. When they have status, they’re more concerned with communicating clearly.”

The third way the fear of looking silly manifests brings me back to grammatical rabbit holes. Notice how grammatical rules seem increasingly cast aside when it comes to the placement of hyphens? It’s just another symptom of the disease. Ask yourself: is a reader really going to roll their eyes if you write “social-media manager”? Maybe they’ll fleetingly think you’re a bit pedantic, but that’s better than someone thinking a social media manager is a media type who likes to party.

Here’s the problem with worrying about looking silly. The first-order objective with all content—and especially thought leadership—is for it to be read. Or watched. Or listened to. Most thought leadership is aimed at senior leaders, and research Harvard has conducted for more than 15 years finds CEOs spend precisely 3 percent of their work time on “professional development.” If we deduce that’s when content could or would be read, it’s about 13 minutes a day.

How does your content justify nabbing some of that time? By being sharp, easy to read, and insightful. We spend a lot of time debating formats to maximize the chance senior leaders will pay attention; we should balance that by thinking about how it’s written. A bonus? It’s much harder to write with fewer words, and brevity forces clarity (note: none of this really matters if the core insights aren’t interesting and distinctive).

All of which is to say: if adding a hyphen (or a serial comma, for that matter) ensures any and all risk of misunderstanding will be removed for the reader, add it. Use short words, and forget about trying to impress people with insider jargon. And when it comes to “dumbing down” content, remember that when readers seek out your thoughts, they’ve already decided you’re an authority whose perspective they value. You don’t need to prove you know what you’re talking about—they already believe you do.

So give them what they’re coming for: clear, concise, actionable insights that help solve problems. That highlights your expertise more than any ten-dollar word or deliberately omitted hyphen ever could. 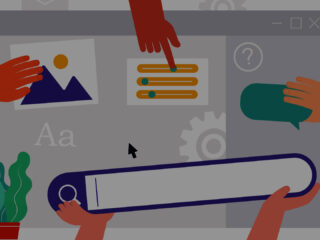